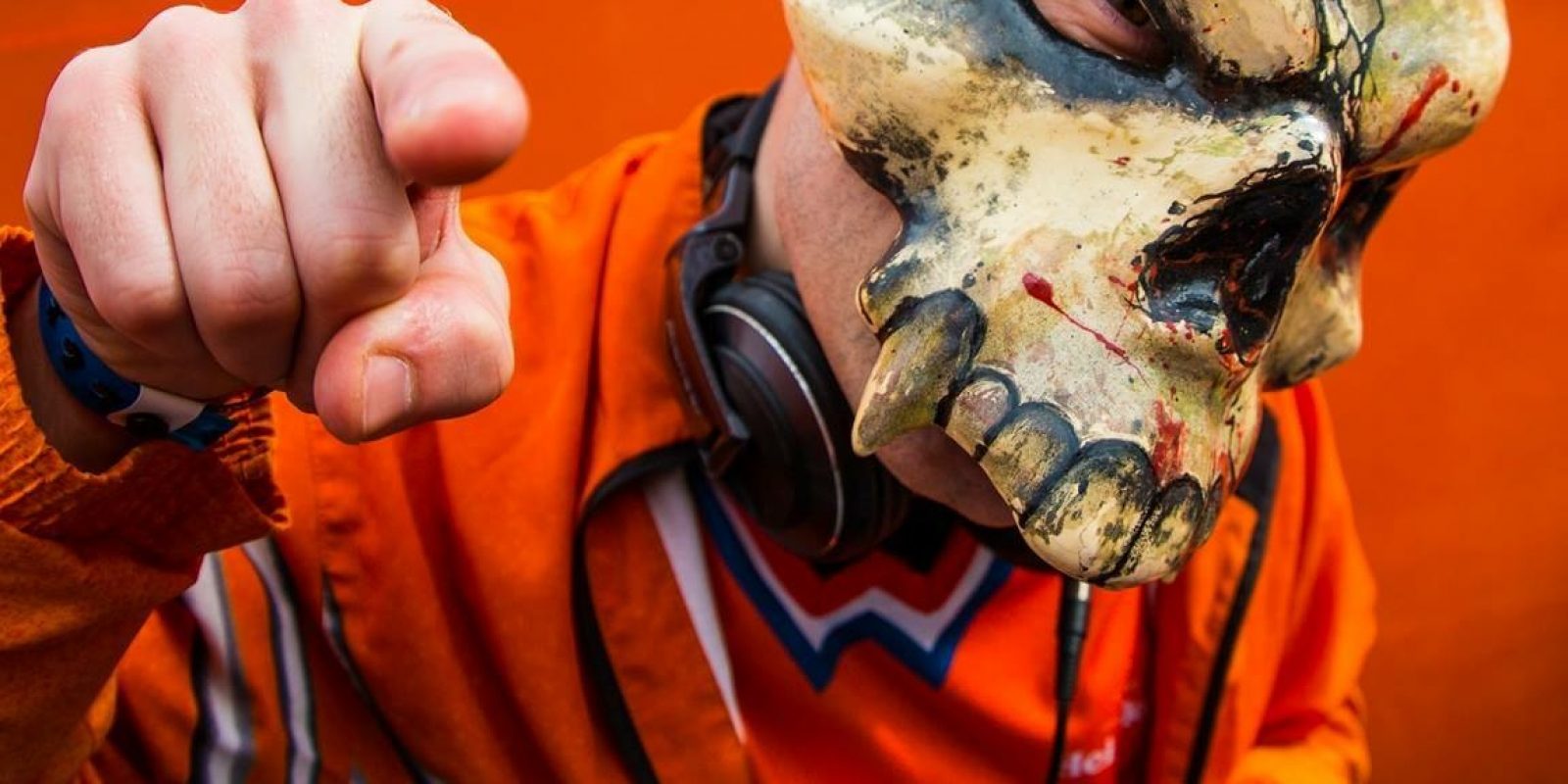 [Interview] F.NøIzE (English) : On the other side of the mask

At the Skullcore‘s party, we have had the opportunity to speak with F.NøIzE about his career, his music and his inspirations.

No I played with the same promoter but in another party.”

-“In 2019 I’m planning to be harder because since last year I realised a lot of stuff but mostly the BPM where around 200-210 BPM, I never went too much far. I did a collab with Anhatema and it is 230BPM so yes I’m planning to do more fast stuff in 2019 and we are also planning an EP with Scarphase next month I think.”

-“If you had to describe your type of music for people who don’t really listen to hardcore, how would you describe it?”

-“Hardcore is becoming very more popular, do you see a big difference between the public of your early years and your public now?”

-“I think the people mind is completely changed. First, because they are more open-minded, especially for the Italians. When I was younger the gabbers were more close-minded. They only listened to hardcore and only hardcore. Nowadays, there are different kind of music like Rap, Rock or Metal. You have other music styles in the hardcore itself. So I think hardcore is quite different than before because now you can mix other styles and people like it.”

-“What is the best memory you had on stage? And the worst?”

-“The best was the first time I played in Netherlands. It was the Thrillogy of Partyraiser and I played with him, Vextor and X-Mind. That was amazing I remember I was so scared to play there because it was the first time in Netherlands and first time next to Partyraiser. The week before I was feeling sick like: “I have the fever, maybe I can not go!  I don’t know…”. But in the end after the first record that I launched on stage it was magic, really. So that was one of the best memory and also the Dominator Festival on the main stage.”

“And the worst, I do not have really a worst because usually I forget the thing so maybe I had it but I don’t remember. (laughs) But I can say the only ever time that I forgot my mask. It happened only one time. I was a multi-stages party and I was playing in a very little room so there was not a lot of people. I was sorry for that indeed but there was not too many people so nobody saw me without mask. Unfortunately, I was not professional, my fault.”

-“Who is the artist who made you want to produce music at the beginning? Your influences?”

-“I started to listening to early hardcore so for me the very first big DJs that I started to follow were Neophyte, Stunned Guys and Paul Elstak of course. I really started with them, the very first track that I heard was Thrillseeka from Stunned Guys. So, when I started to produce, when I was very younger, I was following that kind of style but then when I started to produce professionally I started to felt something was missing: the very hardcore. We were in the millennium period so it was very melodic music, that I loved, but at certain point it was more melodic than kick so I was feeling it was not really the hardcore that I loved and I had to do something so I started to bring some “BABABAM” (laughs).”

-“To the young myself? This is a good question I like it! When I was doing elementary school, I used to have lesson of music and I was one those kids who really don’t liked to listen to professor. I was not focused, even if the guy was trying to teach me how to play the piano, I never learned. So now I don’t know how to play. I have the ears so I can understand if a note is wrong or not. But I can not read a paper of music. So I can not be a real musician. So If I could go back I would say: “Stupid boy! Study at least music! That is the only thing you going to do in your life! (laughs).”

-“Do you sometimes listen to other music than hardcore?”

-“Why the choice of this mask?”

-“The mask is a present of a fan. When I was playing in Rome I was not popular. I met this guy and he was a big fan of me. One day he gave me this as a present, just a white mask. I used it once in white, there are also picture of internet but then I have a friend, a tattoo-maker, I gave the mask to him and he painted it with his hand and believe me if you see it before and now it is an over mask. Before it looked like a toy, now it looks like a real mask. I tried to do two other masks and both were not good. Maybe I will have a new mask soon but it is a huge journey to find a new mask.”

-“F.NøIzE: Porco dio… (laughs). My very first party in Netherlands was Dominator, so I have some special feelings to Dominator and I would lie if I say that is not my favourite festival. But Thunderdome is a culture and represent the music that we are nowadays also living. We have to bring respect for what Thunderdome did and we can not say “We don’t love them”. I would say 50/50 that is the only thing I can say. I have a special feeling for one and so much respect for the other one but can not say if one is better.”

-“What is your favorite DJ in hardcore?”

-“If we talk about DJ skills? Partyraiser! That is always my favourite. For the production aspect it is Tha Playah because even if nowadays he’s not creating many track, his old album is still one of my favourite. I love also Angerfist indeed but my very favourite of all time is 3 Steps Ahead (Peter-Paul Pigmans), I don’t know if you guys now him but it is one of my favourite early hardcore DJ and unfortunately he is dead. For me he was a very big inspiration. His music is still actual this time. He was in the Thunderdome, he started the scene together with The Prophet. He is my favourite of all time.”

-“Thank you very much for your time F.NøIzE, have a good show and see you in Netherlands !”

So we go back to the giant head, ready to dance to the rythms of the DJ. He doesn’t disapoint us, even if he plays at a late (or early) hours. He succeeds to drain the last drops of energy that we have. Even if the crowd is tired, it won’t stop dancing till the early morning.

We go out of the building, tired but happy and take the tramway with one idea to our head : our beds.

We invite you the 23rd of February for the Stormcore, at “L’EXTREM”, with big guests as Noize Suppressor, N-Vitral, Vortek’s, Venom…